Women Whistling Songs for Me To Appreciate

Having a blog, and with it, software to see where people are coming from and how often they are reading what you write, can be a bizarre experience sometimes. Early this morning, I was searching the referring links to see how people were finding the Optimistic Curmudgeon, and I found that someone had gotten here by Googling “women whistling songs for me to appreciate.”

It was such a great, strange phrase, I couldn’t imagine the circumstances that would bring someone to type those specific words. And, after having done that, what would draw them to the Curmudgeon once they saw the link?

I clicked on the URL for the referring link, and it brought me to that search. Not only had someone skipped from that page to the Curmudgeon, it was page 86 of the results Google had brought up for that particularly odd phrase. Apparently at some point, the Curmudgeon was ranked somewhere between 860 and 870 in terms of interest to people who wanted women to whistle songs they liked.

It had changed by the time I got there, and I actually had to add the word “optimistic” to my search to see how that came together. It comes from a ludicrous tangent in my interview with Zach Galifianakis, who is wonderful with ludicrous tangents. We somehow got onto the topic of whistling and the guy who whistled the Andy Griffith Show theme song (scroll down if you’ve been dying to hear Zach’s thoughts on that).

If you read this and you’re the person with the whistle fetish, I hope the Curmudgeon didn’t disappoint you. If you keep coming back, I’ll start to ask the comedians and musicians I interview about whistling. It’s not necessarily my thing, but when the public speaks, you have to listen.
Posted by Unknown at 2:58 AM 1 comment: 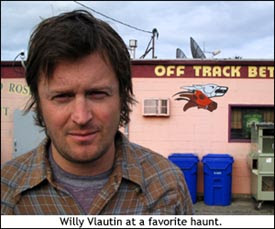 Willy Vlautin – a man who writes about hospital ward tragedies, accidental homicide, and every day destruction – feels lucky. He feels lucky his first novel, The Motel Life, was published last year by Harper Collins. Lucky to make a living writing, and lucky to have a band that enjoys playing together, even if he has earned the nickname “Captain Comedown” from his friends in the band Grand Champeen.

“We’re definitely not a sad sack bunch of guys,” says Vlautin, speaking from his home outside Portland, Oregon. “But I think I just write from that area, and the guys in my band are nice enough to play my songs. I couldn’t ask for a cooler bunch of guys to play with. So it’s lucky for me.”

Vlautin’s heroes have always been writers like Raymond Carver and William Kennedy, and Richmond Fontaine’s catalogue is peppered with songs full of emotional dead ends and soul-shaking despondency. But Vlautin never thought he could survive on writing alone. So he took jobs painting houses and, inspired by cowpunks like Rank n’ File, the Blasters, and X, turned to rock and roll. “If I had had more confidence I would have just been a writer, I think,” he says. “But I was a horrible student and I loved rock and roll more than anything and I didn’t even think a guy like me could write.”

Vlautin says that lack of confidence fed into some early lackluster performances, which were much more aggressive and punk-oriented than Post to Wire or Fontaine’s latest, Thirteen Cities. Those early records are still fan favorites, but there is much Vlautin would like to leave behind. “I can’t listen to Lost Son,” he says. “Number one, I used to be so shy I’d always sing drunk and you can hear it, and it drives me crazy. I guess the older I get, the more I just get kind of bummed out. I’m not as angry. That’s a pretty angry record. It’s hard listening to your old records. I just can’t do it.”

It would be easy to mistake Vlautin for one of his hard-luck characters. He eschews the hip clubs for the townie hangouts, and spends a lot of time at his local horse track in Portland, watching the races and the people and writing. “I just go there because it’s the only place in Portland that makes me feel normal,” he says. “The rest of Portland is just beyond me. I’ve always been the old man bar kind of guy. In this town it’s just hard. They keep tearing them down. I used to take pictures of every bar I liked, and they’ve torn down all my old favorite haunts. Which I guess is a good thing for my sanity.”

“Maybe I do and I don’t really think about it, but I’ve never really tried to seek out an edge. I’ve always tried to write to get rid of my edge. Maybe I don’t know the difference at this point. I don’t know.”

I used to do stupid stuff. When I lived in Reno, I used to cash my paycheck in casinos and I’d end up blowing a check. I’m not a complete idiot. So I only did that once or twice before I was like, man, you’re a loser. People say I always write about losers, but I never think of them as losers at all. I just think they’re struggling, and I’ve struggled with the same things. I’m really scared of being like that. I write about it a lot because I’m so scared of it happening to me.

A Modicum of Success 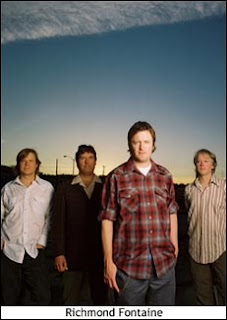 Lately, Richmond Fontaine has been successful enough for Vlautin to quit his day job. The band has found critical acclaim in Europe, driven by the English music magazine Uncut, and tours there regularly. “I think anytime a big magazine gets behind you, life’s just easier after that,” he says. “And I think in the States we never had that one big push where that happened.”

European audiences, and especially Irish audiences, tend to understand the redemptive aspect of Fontaine’s darker material. That’s something American club audiences might not respond to quite as readily, especially if they come to a show not already familiar with the band. Ireland has become almost a second home to the band. “They listen to the lyrics and they listen to the story of the song, which, for a guy like me, is like going to heaven, actually listening to the story,” says Vlautin. “So it’s been an amazing time, getting to play there. They understand what we’re doing, which helps.”

They’ve also recorded their most eclectic and engaging album yet, Thirteen Cities, and evolution from their more aggressive country punk roots. “A Ghost I Became” is a slow burn over a distant tympani beat with spare, atmospheric organ and guitar. Muted trumpet punctuates Vlautin’s busy acoustic arppegiation on “The Kid from Belmont Street.” There are even a few upbeat moments, the horns on “Moving Back Home #2” or the jangling beat of “Capsized,” belied by Vlautin’s psychologically intense stories.

“Sometimes if you’re in a bad situation like in ‘Painting Houses,’ the guy has a job with a crew that’s hiring illegals and then not even paying them. Sometimes maybe all the guy can really do is quit that job. He’s not strong enough to take it to the authorities and all that. Maybe he just realizes he doesn’t want to be affiliated with that, so he quits and gets another job. They’re trying to do the best they can.”

Vlautin credits producer J.D. Foster, with whom they’ve worked since 2002’s Winnemucca, with giving him the confidence to try new things, and also a change of scenery. “I was so excited that we would get to record in Tucson that I kind of wanted to write a ‘Richmond Fontaine goes to the southwest’ kind of record,” he says. “And I’ve always loved songs about drifters so I really wanted to write my version of those.”

Plans are already in place for a second book, which includes a soundtrack, to be released in the U.K. early this year, and Vlautin is busy doing what makes him happiest, writing a third novel and songs for a new album. “For me,” he says, “the only time I’ve ever felt I have control over a situation is writing because you’re the king and you can save who you have to save and hurt who you have to hurt.”
Posted by Unknown at 1:08 AM No comments: Stella Mozgawa has to go outside to talk. Her Mink bandmates are making too much noise for her to communicate by cell phone for her interview on the tour bus, “The Eagle,” which she thinks smacks of 70s metal. “It’s a bus you would imagine Iron Maiden to be touring in thirty years ago,” she says.

It’s not hard to imagine Mink on such a bus. They had barely been together a year before they impressed Gene Simmons enough to land a slot on last summer’s Rockfest with KISS. Then it was an opening slot with Perry Ferrell’s Satellite Party and Lollapalooza, before they even managed to release their first album. Their self-titled debut, complete with day-glo pink skull cover art and plenty of gritty attitude, was released in August, just a year and a half after the band came together.

It seems like Mink was ready made for the term “rock star,” but Mozgawa dismisses that as cliché. “If for some reason I feel like getting drunk and vomiting onstage it’s kind of passé unless it’s done in like a corny, post-modern way,” she says. And in any case, they’re not trying to capture someone else’s idea of what a rock star should be. “We just try to be ourselves,” she says. “We love bands from the 70s and 80s, and we love modern pop music and modern rock music. We don’t really try to pay homage to it.” 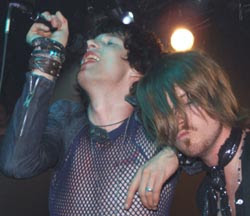 The band members weren’t even on the same continent at the beginning of 2006. Then, early in that year, singer Neal Carlson met guitarists Nick Maybury and David Lowy and bassist Grant Fitzpatrick through their shared Australian manager, and hit it off immediately. They had already planned a tour when Carlson followed them back to Australia in May, when Mozgawa stepped in for their departed drummer.

It didn’t take them long to amass a set list, either. Mink was given a mandate by producer Sylvia Massey to write thirty songs in one month, from which they would cull an album. Mozgawa says they wound up writing roughly forty. “It was ridiculous,” she says, “but it was fun, but it was this process of not really laboring too much over something, just having it have the essence of something and just get it out there and afterwards working on polishing that and producing it, as it were. Just having it really natural.”

The album is a mix of buzz saw rock and hooky guitar pop, inspiring frequent comparisons to the New York Dolls and Sex Pistols. “There’s some more produced tracks, there’s some poppier tracks and then some rock, punkier tracks or whatever,” says Mozgawa.

And while Mink isn’t quite as raw as their trailblazing predecessors, there is something elemental about them. That emerges from the band’s chemistry – Carlson is the chief songwriter, but everyone contributes – and their focus on keeping things loose. “It’s tongue-in-cheek, it’s fun,” says Mozgawa. “It’s nothing too dramatic or political. It’s just fun and celebratory.”
Posted by Unknown at 2:06 AM 1 comment: