No Depression No More, Editor Peter Blackstock Talks about the End of an Era 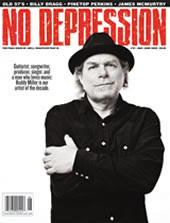 When you see the latest No Depression on the stands, the one with Buddy Miller on the cover, pick it up and pause for a moment to reflect. The issue marks the end of a thirteen-year run of covering some of the best music being made in America (and sometimes beyond). Editors Peter Blackstock and Grant Alden and co-owner/co-publisher Kyla Fairchild decided in February to cease publication of No Depression, much to the dismay of music fans, especially fans of Americana (or alt.country or the new sincerity – they’ve always had a little fun with the breadth of the genre). On a personal note, I lose a consistent source of information on my favorite music, longform journalism about under the radar subjects, and a magazine that gave me some of my first legitimate magazine clips.

Conditions have never been worse for music magazines – shortly after the No Depression announcement, Harp Magazine and Skope Magazine also announced they were shutting down print operations. Declining CD sales have meant fewer music stores, which has meant fewer places to stock the magazine, and fewer advertisers.

The good news is, the Web site will continue, and Blackstock, Alden, and Fairchild will continue putting No Depression in print in a different form, what they call a “bookazine,” which they will release semi-annually with the University of Texas Press starting this fall. And you can still keep in touch with the No Depression mailing list, fitting for a magazine that grew out of a Web discussion group in the first place. No Depression will continue, but there will no longer be the anticipation of that issue hitting the stands ever couple of months, and the satisfaction of bringing it home and tearing into that cover story of your favorite artist no one else is writing about, or finding those new artists in the “Town & Country” section, some of them in your own home town.

I caught up with Peter Blackstock by e-mail recently to talk a bit about No Depression past and present.

What sort of reaction did you get when you announced that No Depression was ending its print run?

There was a pretty strong outpouring of sentiment from our readers. More than two hundred people have left comments on our website about it over the last couple months, and of course there was also a ton of letters, many of which we published in our final issue. A lot of people had some really kind words about how much the magazine had meant to them. Quite understandably a lot of them were rather disappointed we wouldn't be continuing as a bimonthly anymore -- no one was more disappointed than WE were, certainly! -- but I think that folks are only just now beginning to realize how tenuous a position the print journalism industry is in, especially when it comes to niche music magazines.

What was the first indication that you had to seriously consider ceasing publication?

It actually had never even come up for discussion until mid-January, about a month before we made the final decision to do it in mid-February (we sent out the announcement on February 19). Our advertising-base had been shrinking for a couple of years -- whereas we used to routinely publish issues of 144 pages (and occasionally larger), we'd more typically been around 112 for the past year or two. Still, things had more or less balanced out fiscally in 2007. But our first two issues of 2008 were both just 80 pages, which is smaller than we'd been since the very early days of the magazine, about 10 years ago. And the future prospects suggested things probably would only get worse, not better.

We realized that if we tried to continue, we could easily run ourselves into serious debt, and that's never been the way we've done business. We didn't want to be in a position where we could not afford to publish our final issue, as was the case with a couple of other magazines which closed up shop recently. It was important to us that we go out in the style of our finest work, which I think we managed to do with our May-June issue (thanks in no small part to many of our longtime advertisers, and even some new ones, who helped us get to 144 pages for the finale).

It seems like many of the same problems with marketing to a niche demographic have existed since the inception of No Depression, how drastically has the environment changed in the past year or two?

The "niche," musically speaking, is about the same as it ever was, although we obviously broadened it ourselves over the years. Early on we had fairly tight alternative-country boundaries, whereas over the years we expanded to cover a much broader range of Americana/traditional/roots music, as well as some occasional indie things (especially when they related to the roots realm). I honestly don't think our dilemma relates at all to the viability of the music, in large part because it was there long before we started covering it, and thus logically should be there long after as well.

What we managed to catch, when we began in 1995, was a sort of high-point in the visibility cycle for those artists -- part of which we contributed to creating or fostering, certainly, but partly there were just a lot of very good young roots acts who were getting major or semi-major record deals. But all the history still ran underneath everything, and it still does. And the ebb-and-flow of younger bands drawing upon that history continues, as evidenced by the surge in string bands that we recently wrote about in our March-April issue. So ultimately I don't think the "niche" has changed much at all; it's really just the business climate that has changed, in terms of how the internet has greatly affected both the music industry and the print journalism industry.

Was it frustrating to you that this happened at a time when the scene you’re covering is as fertile as ever? I’m in Boston, and just using this scene as an example, you’ve got younger bands like Three Day Threshold and Girls, Guns, and Glory, people who have been around the scene for a while like Mark Erelli and Alastair Moock, the Session Americana folks, along with stalwarts like Bill Morrissey and Dennis Brennan. And I know there are other scenes just as diverse around the country.

The string-band story in our March-April issue is sort of a reflection of that, yeah; we were quite intrigued to suddenly find so many really talented and creative young acts drawing upon old-time traditions seemingly reaching their peak right now, and we'd have been excited about covering them long into the future. (Many of those musicians are based around Boston as well, in fact, most notably Crooked Still, and also a couple members of Uncle Earl.) But I'm not sure there'd ever really be a "good" time to go out, in that it seemed that during our 13 years, there was pretty much constantly a good stream of quality roots-oriented music being made, by artists both younger and older.

Did you have a strategy for the Web and the “bookazine” before you announced the cessation of the print version?

We'd assumed that we'd continue the website in some form or fashion, but the bookazine deal with University of Texas Press came about entirely after we'd made the announcement. We decided to speak with them in part because they'd published our tenth-anniversary anthology in 2005, and in part because there were examples of other roots-related publications that had teamed up with universities (Living Blues at the University of Mississippi, Oxford American at the University of Central Arkansas). They were interested in seeing if we could work something out to at least continue us in print on a limited basis, in a way that did not involve being dependent on advertising. The twice-annual bookazine is what came out of those discussions.

Are there any other publications doing anything similar to that, anywhere you are looking for inspiration?

It's really pretty new territory. Grant (my co-editor) has looked at a few more literary-type things such as McSweeney's to get a vague sense of what form things might take, but to our knowledge nobody's really doing anything like it in terms of music content. Part of our intention here is to create something basically new, something that isn't already out there.

Can you envision a time when you would ever revive No Depression in print?

I think the market circumstances would have to change significantly, in a way that's not very likely to happen. People would have to start gravitating back toward print and away from the internet, and that seems highly doubtful especially as more and more younger music fans who were raised on the internet model keep flowing into the picture. On the other hand, I'm not entirely certain that web advertising will really pan out the way the advertisers are hoping it will; so far it doesn't seem like it has quite worked out to the degree expected. If somehow there becomes a booming demand for print ads again, then maybe. But that's pretty much what it'd take, and we're not exactly holding our breath for that.
Posted by Unknown at 10:13 AM No comments:

Those of you who know me know I love only two things in life: comedy, and underwear. So much to my delight, local comedian Chris Coxen has combined the two, and is dancing as Danny Morsel to win cash prizes from the folks over at Jockey. Here is his video appeal for votes:

To vote for him, click on this bit of writing right here.

His opponent apparently has a big e-mail list and the inherent appeal of a concave chest, so every vote helps. You have to register, so make sure to mind all the "opt out" buttons. It's fairly quick and painless, and if Mr. Coxen wins, count on even more elaborate productions like this weekend's show at the Cambridge Family YMCA Theatre.
Posted by Unknown at 10:43 AM No comments: