This space hasn't changed much lately, mainly because I have been putting all of my efforts into a new blog over at www.FunnyGrownHere.com. Since I no longer have a regular column in the Boston Globe covering local comedy, I started that blog to pick up the slack in local coverage. If you're a comedy fan, please go take a look. I'm covering the local scene past and present, and you might be surprised at how many great acts came out of this city.

But I do plan to get back to the Curmudgeon when I can. I still have another Richard Lloyd interview to post, the second half of the one below. And plenty of other things I'd love to cover.

In the meantime, I wrote this Sunday night. Hope some can appreciate it. 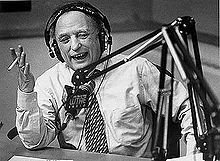 The night the Steelers beat the Ravens to earn the right to face the Arizona Cardinals in the Super Bowl, I was skimming over Myron Cope’s The Game That Was. It made me think about why I'm a fan of footbal, and of the Steelers, specifically. Art Rooney is the center of the story, and Cope the one who told it so well for so long.

The book was his tribute to greats of the game from the past, with chapters on Cliff Battles, Clarke Hinkle, Rad Grange, Don Hutson, Sammy Baugh, Bullet Bill Duddley, Marion Motley and Bill Willis, Bobby Lane, George Halas, and a few others, with an introduction and then a long section in the player's own words. It was written in 1970, before Cope left behind his career as a respected print journalist to become the voice of the Steelers, before he invented the Terrible Towel, and before he became a beloved part of Pittsburgh's sports history.

There is, of course, a chapter on the Chief, Art Rooney, in which Cope calls him “professional football’s champion loser,” even though Rooney had been successful at everything else he did – a welterweight boxer with national and international amateur championships and a minor league outfielder with a .396 average and 58 stolen bases (a prospect in the Red Sox farm system with the Wheeling Stogies, no less) =- outside of football. In his own words, Rooney talks about growing up in “The Ward” in Pittsburgh, buying the Steelers in 1933 when Pennsylvania “blue laws” made Sunday football games illegal (who could even fathom that today?), signing eventual Supreme Court Justice Whizzer White out of Colorado University in 1938 for a king’s ransom of $15,800, and his genuine affinity for players in his system (including Elbie Nickel, Jimmy Finks, Bill Walsh, and Ernie Stautner).

Rooney also laments giving his coaches “a free hand.” “I’m positively sure that had I run my ball club, like George Marshall ran his ball club, we would have won championship after championship," he tells Cope. "I was able. I was competent. Knowing football, knowing football material, and knowing what was what, I’m sure that if I would have said, ‘We’re not gonna do that, and you can like it or get out' -- if I’d said that, I’m positively sure we would have won championships. But I can’t change now. I’m too old to change.”

It’s a damn good thing he didn’t. Rooney said that in 1970, when the book was published. He already had the coach and some of the players that would allow him to see four championships in his lifetime. Coach Chuck Noll would take a laughingstock with a losing history, find a champion quarterback and a stifling defense, and bring home the Lombardi Trophy (that storyline should be familiar to Patriots fans, which is what mainly upsets me to hear so much outright hatred for the Steelers in my adopted hometown).

Here’s a bit more from the book and Rooney – a great read for fans who can find the out-of-print book in a used bookstore somewhere:

“Have I ever had any idea of selling the club? No, never. My boys are grown now, and they like the business. Losing kept down our crowds, that’s true, but money has never been my god – never. I’ve had opportunities to move the franchise. I’ve had tremendous offers. Back in the early 1950s I could have moved to Baltimore, and then later, to Buffalo, Atlanta, New Orleans, Cincinnati. The propositions they made were fantastic. So it you didn’t have ties, if you didn’t care for your city and its people, if you were just looking for wealth, you could have picked up and gone. But that’s not you, not if you care for your city. And I believe Pittsburgh is a great city. I believe if we win, we’ll do as good as we would in probably any of those other towns.

“Well, when you lose you’re so dumb you don’t know enough to come out of the rain. All losers are dumb. All winners are sharp. When you win, you know all the answers. I don’t know all the answers, so maybe we are dumb. But we’ve tried. We hired Buddy Parker, a top coach. He came to us with a big reputation, not many coaches sharper, and he was a good man. But he was here eight years, and still we didn’t win. We hired Bill Austin, who came just as highly recommended as could be, by none other than Vince Lombardi, who we know would tell us the right thing. Okay, we didn’t win with Austin. Now we come up with a new man, Chick Noll, who came from Baltimore, a championship club, with a reputation that’s just as good as can possibly be.

“We pay. I think Buddy Parker, when he was here, may have been one of the highest-priced coached who ever worked in the league. The papers said eighty thousand a year. It was more. When we make trades, we don’t ask what does a player get. Until now – and I don’t know how long this will continue, because times are changing – but until now, we’ve never had a ballplayer here who’s played out his option. What I’m telling you is we’ve tried. But I want you to know, and I want the town to know, that I’m not alibiing. I’m not crying. I’ve just told you our side. Who’s interested in losers’ alibis?”

No one is interested in losers’ alibis, but Rooney was most definitely not a loser. And his patience paid off. And come to think of it, it’s still paying off, long after the chief passed the franchise along to his son Dan, long after he passed in 1988.

If you’re a fan of football, how could you read those words and not have respect for the history of the Steelers franchise and the Rooney family? Those are the things I think of when someone whines to me about how silly the Terrible Towel is, how Joey Porter always shot his mouth off, how they think the team is a bunch of “big mouths,” as I heard yet again on WEEI last week. Those people don’t know their history, and they don’t know the soul of this team.

Being a fan seems silly to a lot of people. But the idea of giving yourself over to something and making it work for you is a common principle. It’s punk rock. It’s Jesus. And it’s waving your Terrible Towel. Blasphemous? Sure. But only to the nonbelievers.
Posted by Unknown at 3:07 PM 1 comment: