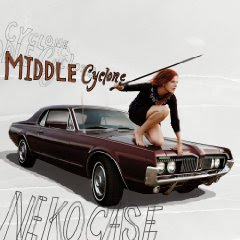 For those who think of NPR as a source of daily news and the Prairie Home Companion, you might want to give NPR.org a second look. They’ve been a pretty good source for independent music, through artist interviews and music previews. Their latest subject is Neko Case.

Case’s new album, Middle Cyclone, isn’t out until March 3, but NPR.org is previewing it here. Cyclone is packed with guest musicians from M. Ward and Garth Hudson to members of Los Lobos and frequent Case collaborators The New Pornographers.

The album has an airy, 60s folk feel, and sounds like it was recorded in an empty symphony hall, which serves well to underscore Case’s dramatic, full-throated singing style. She could be singing these metaphor-filled love songs from a lonely perch on the edge of a country valley if it weren’t for the often lush orchestration behind her. And thanks to NPR.org, you can hear it for yourself before looking for it next week.
Posted by Unknown at 3:20 PM No comments: