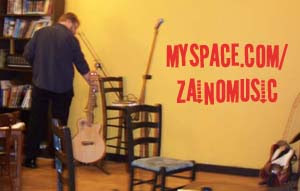 You may have noticed, if you're one of the nearly ten people per day who come to this site every day, that I haven't posted in a couple of weeks. I swear I have a reason for that, and it's something you can actually go see and hear. I am also a musician, and I have been recording my own music in the Lynn home studio (which is a laptop, a couple of microphones, and a bunch of instruments). I've added two songs to my music MySpace -- one a song I wrote about optimistic curmudgeons in love called "Queen of Uneasy" and the over a cover of Tom Waits' "Looks Like I'm Up Shit Creek Again." You can click here to check them out, or even download them, if you care to.

I will have a new post up Monday or Tuesday. A few weeks ago, I published my list of the Best Comedy Albums of 2007 in the Boston Globe. I led off the piece with a feature on Boston's own Robby Roadsteamer, who released a great, funny acoustic album called "LRP" in December. But there were so many good albums last year, and a few noteworthy also-rans, that I had enough to follow-up with a list of honorable mentions, which you will see in this space Monday or Tuesday.

After that, I have more from my interview vaults, more music, more politics, and a few essays to roll out. On a personal note, I am just learning how to balance writing for this blog, writing music, freelancing, and other projects and keep all of them running at once. It's something I plan on doing a better job of in 2008, so stay with me.
Posted by Unknown at 12:58 AM 1 comment: 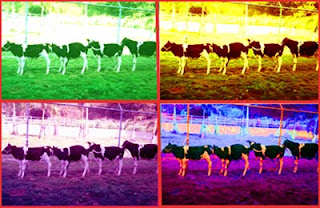 Because apparently it was just too hard to make tasty cows the old way: U.S. Gives Blessing to Food From Cloned Animals
Posted by Unknown at 7:21 PM No comments:

Email ThisBlogThis!Share to TwitterShare to FacebookShare to Pinterest
Labels: Humor and Essays, OC-Ed

Last night, I was watching results from the New Hampshire primary on MSNBC somewhat bleary-eyed while working late on writing assignments. It was entertaining enough to watch the speculation, the most amusing of which was the “weather theory” – the warm weather helped get all the old people who support Hillary Clinton and who are generally afraid of a fifteen degree temperature change out to the polls. This was either an overlooked “not so sturdy” demographic or somewhere in the halls of research that pundits use to analyze the habits of primary voters, there’s a big folder marked “what happens if it’s sixty degrees” that finally came into play.

After 66% of the vote was in, Clinton was ahead 39% to 36%, which made MSNBC comfortable in projecting Clinton the winner. Apparently, 34% of the vote couldn’t make a 3% difference, but then again, I’m the kind of guy who watches the last second of every football game even if the team I’m rooting for is down by three touchdowns.

After this projection was made, Keith Olbermann interviewed Jay Carson, a spokesman for the Clinton campaign. Carson was ecstatic with the win (at some point in the evening, someone called it the greatest comeback in American political history), and said the people of New Hampshire had answered the questions “who can be the best president” and “who can win in November” with “a resounding Hillary Clinton.”

Just as I was pondering what a “resounding Hillary Clinton” translates into in real world terms, Carson offered the following:

“She got out there, she made the case that the American people and people of New Hampshire need talk and not just action and the people responded. We’re gonna have a great night, and we’re gonna go on. We’re going to keep on fighting, we’re gonna fight all the way through February fifth, and we feel the whole country is going to respond to that message.”

I laughed out loud at the gaffe, which Carson didn’t notice. For a moment, I was pondering whether Clinton had suddenly turned honest about her campaign rhetoric. Then Carson almost said it a second time, but finally caught himself, “People want talk – people want action, not just talk after seven years of George Bush.”

Honesty is often inadvertent. This election, the American people truly need talk and not just action. They should be well sated by November.
Posted by Unknown at 2:46 PM No comments:

If you think the word “sanctuary” is scary, Mitt Romney is your candidate. Every election cycle, politicians destroy little bits and pieces of our language by trying to co-opt words they can use to attach to an opponent like lead shoes and watch them sink. It’s easier than all that thinking stuff – and they’d rather you didn’t do much thinking either. This is how the wonderfully distortion of Aristotelian logic works:

No one is better at this than Mitt Romney, an inveterate hypocrite who, when campaigning for governor of Massachusetts in 2002, stood in front of a wrecked car on which he had painted (or, more likely, had hired an illegal immigrant to paint) the words “Beacon Hill Mess” in bright yellow letters and pretended to work on it with a “wrench of reform,” and then told people he didn’t like campaign gimmicks.

Watch the language of the Romney campaign. He’s trying to coin terms like “Hillary Care 2.0” and to label anyone who thinks George W. Bush’s “Axis of Evil” is overblown rhetoric at best and destructive utter horseshit at worst as “foreign policy elitists.” He may be smiling under that hair and talking smooth, but his logic is Tarzan simple, and his motives as Machiavellian as can be. Me, good, others, bad. Me make fear, win big prize.

Romney has said that he believes some immigration is good – if, for example, you’re building robots. But if you don’t have time to learn how to build a robot because you’re running for your life from economic or political persecution, fuck off. Back across the river with you. America wasn’t founded with sanctuary as a basic principle – it was just a capital land acquisition by a small, aggressive foreign start-up that was successful in eliminating the competition from marketplace (see “Trail of Tears”).

I’ve posted a few quotes below demonizing the word “sanctuary.” I can’t believe people fall for this crap.

(And as an aside, can we stop talking about the goddam Olympics? Romney helped bring money into the Olympics by selling corporate sponsorship and making the games look like a NASCAR. Maybe he’ll solve the national debt, but get ready to see the Lincoln Monument wearing a Staples T-shirt and banner ads flashing across the White House lawn. Maybe he’ll even do Alpo commercials during the State of the Union like Johnny Carson used to do on “The Tonight Show”).

“Today's statement by Mayor Giuliani that his sanctuary policies toward illegal aliens created an 'orderly' and 'lawful' society turns logic on its head. You don't promote a lawful society by condoning illegality. As governor, I opposed driver's licenses for illegals, vetoed tuition breaks for illegals and combatted sanctuary city policies by authorizing the state police to enforce federal immigration law. As president, I will secure the border and reject sanctuary policies by cities, states or the federal government." – MittRomney.com, Nov 19, 2007.

“If you have a city like Mayor Giuliani's city, New York City, that says that it's a sanctuary city, they're going to provide benefits to people that come here illegally, you say, we're going to cut back on federal funding to those cities as well. We can end the magnets that draw people here illegally – illegal employment by having an employment verification system, the sanctuary state of mind which you see in sanctuary cities, sanctuary tuition breaks, sanctuary driver's licenses. All these things are bad ideas and the American people are going to speak so loud and clear on this issue it's going to get done." – MittRomney.com, Nov 14, 2007.

“There is a sanctuary state of mind in this country, and it's not just Democrats, it's also Republicans. You had a mayor of New York that said we're going to give sanctuary status to any illegal. They got welcomed to New York City. I think that's a mistake. You had, in the case of Governor Huckabee of Arkansas, a governor who said let's give tuition breaks to illegals living in our state so that you have the children of illegals getting a lower tuition rate than the children of citizens from the other 49 states. That kind of sanctuary state of mind has got to end." – MittRomney.com, Nov 14, 2007.