Ken Carlson and The Comedians magazine 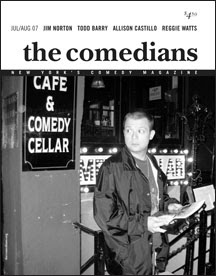 I first heard about The Comedians magazine when their editor, Ken Carlson, contacted me about a profile of Boston comic Tim McIntire he was writing. I was excited to hear about any magazine that would write a lengthy profile of a comic that I knew so well from the local scene for a market outside of Boston. Shecky and Punchline are both great publications – I’ve had some great conversations with Brian and Traci over at Shecky, which is a great industry resource for comics, and I occasionally contribute to Punchline.

But The Comedians has its own niche, with longer pieces on a few bigger name comics like Mario Cantone and Jim Norton but also great, lesser-known acts, at least on a national scale, like McIntire and Matt McCarthy. (If you notice a New England bias, that’s partly because Carlson played rooms like the Comedy Studio and Portland’s Comedy Connection when he was a comic, before the demands of grown-up life forced him to put it aside). The Comedians is also a fascinating peek inside the New York City scene, where the print version is mainly distributed, but Carlson will sometimes stray as far as Israel for comedy to interview comics like Yonatan Friedrich.

I caught up with Carlson by e-mail recently to talk shop about comedy and his vision for the magazine.

Did you set out to create a local New York magazine for comedians, or have your plans always been for a wider audience?

When I started the comedians, I wasn't quite sure of the path it would take, but I am happy with its direction. One night last summer, I was sitting in the back room of an ordinary Lower East Side bar watching a free comedy show. One after another, the host introduced these really talented comics with solid credentials (this guy wrote for "The Chappelle Show", this guy recently appeared on "Late Night with David Letterman", this woman was on "Live at Gotham", etc). At that moment I knew I wanted to develop something that would focus on creative comics and try to discuss their craft in an honest way. It's certainly a niche product, but not solely intended for comedians. While New York represents the center of stand-up, so many of the acts work nationally, so it has appeal in other markets.

How did you get in touch with Yonatan Friedrich in Israel?

Yonatan is a comic from TelAviv who contacted me. He liked the website and reached out to me. We emailed back and forth a few times and I thought it would make for an interesting story to get his perspective on stand-up. We ran that article over the spring and I received a lot of positive feedback from it. That was one of those instances that opened my mind a bit to include more than just comic interviews with local performers and reviews in the comedians. Now we feature improv groups, humor columns, foreign comics performing in NYC like Glenn Wool, a Canadian working out of London, and industry professionals.

That's something that fascinates me - how stand-up comedy is perceived and created in countries that don't have a tradition of it. How do people even conceive an act in that kind of environment, and how do you judge expectations?

You have to take a few things into consideration. One, certain cultures are incredibly uptight about controversial material. Look at America where we have "freedom of speech," but comedians have been lambasted and arrested for what they've said on stage. But while jokes about car bombs or the holocaust may get you into trouble here, in Israel, it's something that has affected every single family and thus more acceptable, as I understand it, because the comic shares the common background. 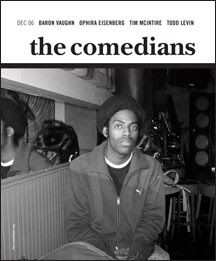 How did you make the move from Internet to paper?

The first couple of issue of the comedians were published online and in print. The website and the copies I handed out for free acted as sort of a test to see what people thought. People were very complementary about it so I decided to move forward. I focused on the print because it's written with print in mind and I thought it would stand out against all the websites. It's a bit of a throwback. One comedian I spoke with said it reminded him of an engineering journal from the 50's. I like printed materials. They give the reader a sense of permanence.

How do you choose who to cover? Is there a specific set of criteria?

There are a lot of smart, creative comics that perform in New York. I try to feature those that generally reflect the entire comedy scene.

Do you see yourselves competing with online mags like Shecky and Punchline?

Not at all. There's plenty of room for media outlets of all forms. Shecky and Punchline are two good ones. It comes down to content and point of view. A lot of websites treat stand-up in a goofy, immature manner. From the start, I have tailored the feature articles in the comedians from in-person conversations I have with the artists. The majority of the text are the comics' words, not mine. I'm not terribly interested in their bios or backgrounds. I want to know what they think about their craft.

What's your view of the stand-up timeline - who created stand-up, when were its golden years, what the scene is like today?

Stand-up started with Mark Twain. If you combine the performances of Twain with the antics of vaudeville and the nightclub era comedians like Bruce, Rickles, Dangerfield or early Pryor, you have the current form. As far as deciding on what the golden years were or are, it comes down to how old you are. As a baseball fan I'm partial to the players I watched when I was a kid - Rice, Fisk, Yaz, etc. It's the same with comedy. My folks are convinced Jack Benny was the funniest man ever. Today, the kids dig Dane Cook and Dave Chappelle. Many comics will tell you Louis CK is their favorite, but half of this country has never heard of him because he's never had a long-running network sitcom like Seinfeld, Ray Romano, Rosanne, or Kevin James.

There's a stereotype that comedians are actually often anti-social or irretrievably pessimistic. What's your view of that perception?

I wouldn't say anti-social. They can be a bit guarded and apprehensive in certain settings. If you take into account that many of them developed their sense of humor to deal with problems at home; then once they move up everyone seems to want a piece of them, it seems understandable. Really good comics give their audience a sense of who they are and I think that can create unfortunate circumstances as well. That's why most comedians' friends are other comedians. I wouldn't say pessismistic either. Jaded certainly. What successful comic gets up there saying everything is great in my life and nothing is wrong with the world?

What's your view of comedy competitions - good or bad for comedy?

I don't put a lot of stock in them, but I don't suppose they do any harm. If they get exposure and some of the sponsors' money for talented performers, I'm all for that. I'd have more respect for a performer who's spent the last twenty years making than someone who wins a contest.

Do you think the mainstream would ever accept a magazine focused mainly on comedians?

I doubt it. The only exception would be for a major player, like Comedy Central, to use it as a support mechanism to promote their shows. But they have their website which is more in tune to their younger market, so why would they bother?
Posted by Unknown at 11:29 PM

Thanks for sharing this link, but unfortunately it seems to be down... Does anybody have a mirror or another source? Please reply to my post if you do!

I would appreciate if a staff member here at optimisticcurmudgeon.blogspot.com could post it.