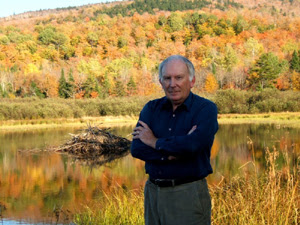 Howard Frank Mosher is, in the best sense, an American writer. He captures the thrill of the frontier and the bitter friction between progress and tradition with a keen sense of his characters’ emotion and their place in a historical timeline. And he takes a particular setting, his beloved Vermont, and paints a visceral, nuanced picture in the imagination in his novels and short stories, including his latest, On Kingdom Mountain. Three of his novels have been made into films by director and fellow Vermonter Jay Craven, the latest being Disappearances starring Kris Kristofferson. I caught up with him by e-mail to talk about his extraordinary body of work.

You set up a lot of early expectations for a sort of feel-good rural anti-authority story in the beginning of On Kingdom Mountain and twist them all the way through. To some extent, that’s just what any author does to create a good story, but you seem to be purposefully destroying clichés (from the resolution of Kingdom Mountain road dispute to Henry Satterfield’s fate).

First and foremost, I’ve always regarded myself as a storyteller. In order to keep the story and characters of On Kingdom Mountain from being eclipsed by the preservationist theme of the book, I set the story in 1930, long before the term “preservationist” existed, and left the resolution of the story open-ended.

The level of historical detail is amazing in many of your stories. I’m thinking of things like measuring off dam partitions or how the Duchess’s gun functions. How much of this do you know from direct experience and how much do you have to research?

I’m an avid outdoorsman, and I’ve worked in the woods as a logger, on farms,
and for newspapers and magazines. Along the way, I’ve picked up a lot of information that has been useful. While I’ve done a fair amount of historical research on topics ranging from the great New England log drives to the Lewis and Clark Expedition, I like to write the early drafts of my books first, then incorporate the research later, in order to fit the research to the story instead of the story to the historical details. Also, I invent a lot of history-much to the dismay of my historian friends. 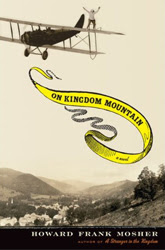 How much of the Vermont timeline (floods, political movements, treaties, etc) is true to life in the books?

Most of the Vermont timeline – the Great Flood of 1927 in Where the Rivers Flow North; the Prohibition-era rumrunning in Disappearances; and the French Canadian immigration in Marie Blythe – is fairly accurate. That stated, I’m an inveterate inventor. For instance, in On Kingdom Mountain I move the famous “St. Albans Raid” of 1864, in which 21 Confederate soldiers rode out of Canada and stole nearly $100,000 from several banks in St. Albans, Vermont, 50 miles to the northeast, and recreate the raid in my fictional Kingdom County.

You reuse a lot of names, Covilles and Kinnesons. In your mind, do all of these characters exist in the same setting? I could imagine, for example, Pilgrim, lost in On Kingdom Mountain, wandering into another of your short stories.

The Covilles, Kittredges, Kinnesons, Allens, and a host of other “Kingdom
County” characters from my stories do all exist in the same setting. Pilgrim Kinneson, Miss Jane’s uncle in On Kingdom Mountain, missing in action in the Civil War, will reappear in my next novel, Walking to Gatlinburg.

Are you trying to get to everyone’s story in the state eventually?

I’m trying to get to the story of as many of the great Northeast Kingdom (Kingdom County) individualists, whom I met and knew back in the 1960s and who dated back to the Depression and Prohibition eras, as possible.

When were you first inspired by Vermont?

I was first inspired by Vermont on the day my wife and I arrived in Orleans, about twelve miles south of the Canadian border. We had driven here from central New York to interview for a couple of teaching jobs. It was the last day of April, 1964, and we were just 21. Right in the middle of the main street were two guys having a fist fight, which they suspended to let us by. When I rolled down the car window and asked them for directions to the high school, they piled into the back seat and directed us there – then they got out and resumed their fight in the middle of School Street. We knew we’d come to a frontier.

Are people surprised by the mix of culture in Vermont – the French-Canadian influence, the traditional blue bloods, the rural traditions all battling within Vermont society. Not sure what comes to mind when the rest of the country thinks of Vermont.

There’s a wonderful mix of culture in Vermont, but also an insidious tradition of latent racism and xenophobia. In 1968, a black family moved to Irasburg, where we live – the first African American to settle in the town. Their home was attacked by nightriders with shotguns, and they were driven out of town. It was the kind of event I would have expected to happen in Mississippi in the 1930s but not Vermont in the 1960s. The racist attack inspired my fifth novel, A Stranger in the Kingdom. What’s more, until quite recently, there was a great deal of prejudice against French Canadians in the Kingdom. I think much of the country regards Vermont as picture-postcard perfect. What I’ve learned, over my 43 years in the Kingdom, is that racism and xenophobia are, sadly, universal.

Do you ever hear from people who visit Vermont because of your books?

Occasionally, readers from elsewhere in America do visit Vermont to see where my stories take place. Usually they’re baffled. The geography is quite different from the settings in my books. Not long ago, I visited Faulkner’s home in Oxford, Mississippi. Suddenly, the tables were turned. When I looked for Faulkner’s town and countryside, and didn’t really find them, I realized that the only place they really exist is in his books. The same is true about my literary locale.

No question so I’ll ask my own. Who are your favorite writers? Answer: Shakespeare, Dickens, Mark Twain, Jane Austen.

Do you collaborate with Jay Craven on the film versions of your work?

Jay Craven has consulted me closely about each of his films based on my stories. I love his movies. His vision, however, is entirely his own. I believe he is unexcelled at casting his films, directing them, and exploring the complex relationships between the characters.

Are you and Mr. Craven neighbors? I know he does a lot of filming within a few miles of his house.

Yes, Jay and I are Northeast Kingdom neighbors.

With the notable exception of first-rate suspense writers like James Lee Burke andElmore Leonard, many “post-modern” American writers concentrate on exploring the inner lives of their characters. I’m a bit more of a traditional storyteller. Books I love best – Lonesome Dove, Cold Mountain, Richard Russo’s just released masterpiece, Bridge of Sighs, in which, for a whole town, the great American dream goes about as wrong as it possibly can yet still seems worth pursuing – tell a great story and explore the psyches of their wonderful characters. That’s the best of both worlds.

I’ve heard from a book rep that you’ve already finished the next book, which he says is you best yet. Care to offer a quick preview?

Yes, thank you. My next book, Walking to Gatlinburg, is the story of 17-year-old Morgan Kinneson, who, in 1864, does in fact walk from “Kingdom County,” Vermont, to southern Tennessee, down in the Great Smoky Mountains, in search of his older brother, Pilgrim, missing in action. Talk about non-stop action and adventure. Walking to Gatlinburg is a Howard Frank Mosher adventure novel to rival my first novel, Disappearances. Of course, the first major review of Disappearances, back in 1977, was headlined “Vermont Writer Should Disappear.” I nailed that review up to the side of my barn, blasted the smithereens out of it with my sixteen gauge shotgun – and kept right on writing.
Posted by Unknown at 6:26 PM

While it's common for an author of fiction to alter local geography slightly to suit a particular tale, to do so with an international boundary, as Mr. Mosher does in 'Disappearances' does him no credit. To have ANY portion of Vermont '..enclosed on three sides by the tall Canadian mountains.' caused this native Californian to assume the author is a geographical idiot... or he assumed his readers were. And as every school boy knows (or at least, those of my era), the St. John River in New England (there's another in Florida) is in Maine.

Fiction offers a fairly wide door as to place but there are limits. To violate those limits shows a basic disregard for the reader, expecting them to adjust their reality to match that of the author. Unfortunately, for most adults 'West of the Pecos' doesn't mean New Jersey any more than the Canadian border of Vermont means Maine.

As a native Vermonter, I invite Mr. Hoover to visit North Troy or the Lake Road extension in Newport Town near the Canadian border to see in person the mountains that surround you in northern Vermont. Although the legal boundaries of Canada and the US are fixed, when I was growing up, there was an undefined space that was in either country or both. Because the "border" was defined on the main roads, areas between these roads were vague. In some places, if you were at a crossroads, three of those roads would lead to Canada, even if you were still in the US. If you had a farmhouse in the US, but your "land" went into Canada, when you stood on the Canadian side, you would be surrounded on three sides by Canada, even though your land would be considered "American" by virtue of your ownership.

In terms of place names, residents of most places I've lived in the US (7 states including 3 in the midwest) have several names for the same river or town or crossroads. When you move to a new town, you have to learn what everything used to be called because oldtimers always give directions using those tags. "Go to the old Smith place (where Smith hasn't lived in 70 years) and follow Snake Road (which is now Route 8) past the Chimney Fork (which we now call East River) and follow John's Crick (Westfield Gorge) til you get to the old oak tree." You would never find any of those names on a current map, but they are true names nonetheless.

Beyond that, I'm not sure that a river name in a book of fiction needs to be tied to an actual river anymore than the character names are tied to real people. I believe Mr. Mosher has captured the feelings of natives that were formed by the geography of the region not by studying a map.